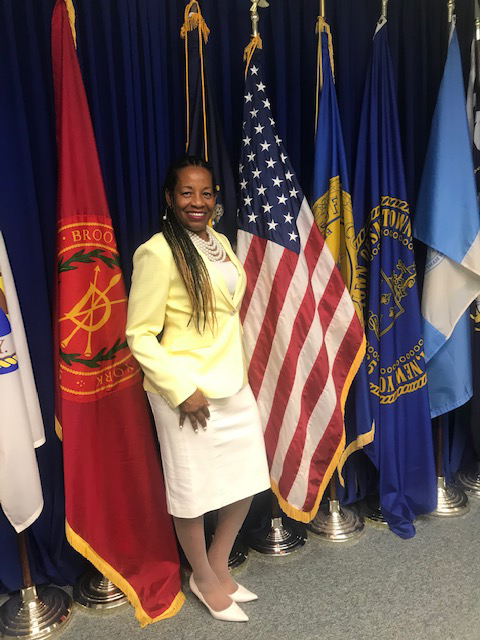 Denise Crutchfield was born in 1957 in New York. She is the granddaughter of Lacy and Annabelle Crutchfield of Coram and the daughter of Perrepper L. Crutchfield. The eldest of four girls, Denise Crutchfield is a natural leader. Her mother stressed education, independence and self-determination. Crutchfield went to West Middle Island Elementary School and graduated from Longwood High School in 1976. Following high school, she completed her bachelor’s degree at Tougaloo College in Tougaloo, Mississippi, and earned a graduate degree from Long Island University in 1996.

Crutchfield can trace a moment that led to her joining the military to an event at Tougaloo College. She saw a group of R.O.T.C. students repelling and she said out loud, “I can do that.” A commanding officer overhead her and before she knew it, she was hooked up in repelling gear and proving she could do it. She was commissioned May 11, 1980. Her first duty station was Ft. Bliss, Texas where she completed officer basic training. Her first duty assignment was an overseas tour in Germany, where she participated in two North Atlantic Treaty Organization (NATO) Reforger Exercises, serving as a Tactical Control Officer with 2nd Battalion, 2nd Air Defense Artillery (2/2 ADA), Charlie Battery, Improved Hawk surface to air missile.

Crutchfield was a trailblazer. She was the first African American officer from the Long Island area and was one of the first female officers to enter a Combat Arms unit. While in Germany, she was viewed as a rarity by the German army because they did not have female officers in combat arms units. Her last year overseas, she served as a Tactical Director and Training Officer for 2/2 ADA Headquarters/2Headquarters Battery (HHB).

Her stateside reserve duty station was with the 695th Maintenance Battalion in Fort Totten, New York, where she served as a Communication Officer. Her military goal was to command a unit. She would go on to become the 618th Supply Company Commander, Fort Totten, accomplishing her goal. She ended her service term with the rank of captain (P) promotable. While on U.S. Army reserve, she assisted in founding Delta Sigma Theta Sorority Inc., Pi Delta Chapter at Stony Brook University.

Today Crutchfield is the proud mother of her only child, Royce Bond Clay III of Vallejo, California. She is a member of the Cameo Club and placed 3rd runner up in the 2019 Miss New York Senior America competition. She is active in several military organizations including the Veteran Yoga Project, Dwyer Women Veterans of Suffolk, Eureka Grand Chapter, Order Eastern Star, Color Guard, and Delta Sigma Theta Sorority Inc.