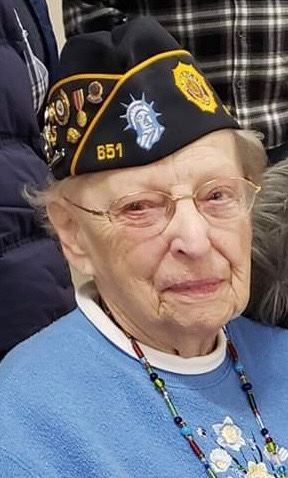 Ruth Welch was born in Queens in 1922 and moved with her family to Baldwin in Nassau County some five years later. She graduated from Baldwin High School in 1940 and started to work with an insurance company. In 1942, right after the United States entered World War II, she enlisted in the U.S. Navy.

Welch was accepted into WAVES (Woman Accepted for Volunteer Emergency Service). She went to radio school in Wisconsin and then was stationed at United States Naval Air Station, Joint Reserve Base in New Orleans, Louisiana. While she was there serving her country, she had the distinction of being the first of five women on the base, where they trained aircraft pilots on the use of radios.

After serving in the Navy and being discharged in 1945 as a TE2 (Teleman-Petty Officer 2), Welch then joined the American Legion. She has proudly served as an active member for over 76 years. She continues to attend the monthly meetings at the Smith-Wever Post 651 in Sayville.