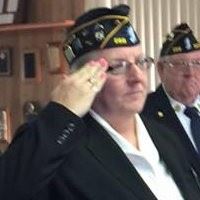 Pauline King is a respected veteran of the US Army.  She continues to help and serve both veterans and her community.

Pauline was raised in Patchogue and graduated from Patchogue-Medford High School in 1980.  She entered the New York Army National Guard in May of 1980 as a Logistical Specialist.  She retired in May of 2005 after 25 years of service with a rank of Staff Sergeant.  She served in an Active Guard Reserve position managing the supply and logistical requirements for the company.  During her time in service, she was stationed both overseas and stateside.

SSG King volunteered to support the Army National Guard Counterdrug Youth program to reduce the demand for drugs.  She has received multiple awards and recognitions.

Pauline has been a member of the American Legion for 15 years and is an active member of Patchogue Post 269.  She has volunteered her time and efforts for the Post and served for 6 years as Adjutant of the Post.  She was elected as 2nd Vice Commander in 2019 and appointed to fill the 1st Vice Commander position in 2020.