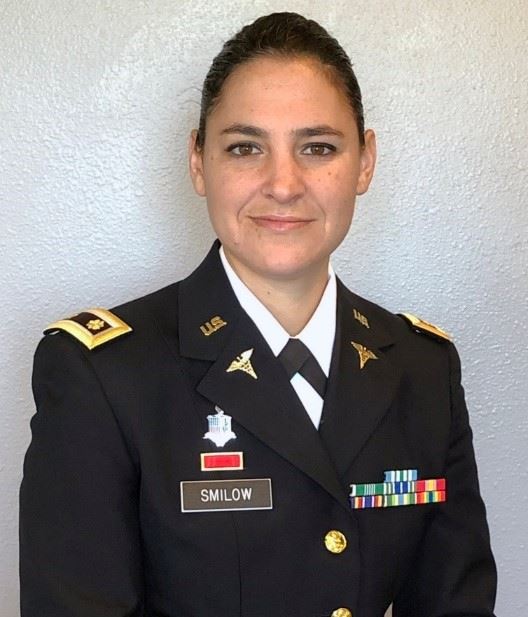 Major Sarah Smilow was raised in Smithtown, graduated from Smithtown High School where she excelled in the sciences, participating in research programs during the academic year and summer breaks.

Major Smilow is the daughter of George and Maureen Smilow and is a triplet!

Sarah attended Johns Hopkins University, graduating with a B.S. in Behavioral Biology. She worked as a psychology therapy aide for the Veterans Administration, where she became aware of the Uniformed Services University of the Health Sciences, the military medical school.  She was accepted and received a medical degree and an officer’s commission in the US Army.

Sarah completed her residency at Madigan Army Medical Center in Tacoma, Washington and was staff internist for one year before returning to Walter Reed Medical Center, where she completed her post-graduate fellowship training in rheumatology.  She was actively involved in teaching and mentoring medical students as well as participating in research projects.

Major Smilow volunteered to work sixteen hours per week in addition to her fellowship responsibilities during the beginning stages of the COVID-19 Pandemic, triaging and screening sick patients at the Walter Reed Medical Center screening tent.

Major Smilow has returned to Madigan Army Medical Center where she works as a rheumatologist treating active and retired military personnel and oversees residents and fellows.

From January to May of this year Major Smilow volunteered to serve as Medical Officer in Palau, where she was part of the Civic Action Team, bringing medical care and wellness education to the people of the small island nation in the Pacific.

Major Smilow has received many accolades from the Army, among them, the Army Commendation Medal, Global War on Terrorism Service Medal, National Defense Medal, just to mention a couple.