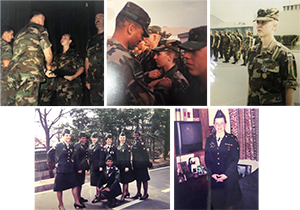 Kelli Porti was born in Queens, NY and raised in Nesconset, NY. In her early years, she attended Tackan Elementary School, Great Hollow Middle School, and Smithtown East High School. She graduated with her diploma, but after graduation she wasn’t sure what she wanted to do next. That’s when she decided to join the service to provide herself a college education through the Montgomery G.I. Bill.

She served from September 1994 to September 1997 as a 92Y Supply Clerk – Unit Armorer and eventually cross trained as a Budget Analyst at the Battalion level. Kelli served stateside at Ft. Rucker, Alabama and then served a hardship tour at Suwon Rock Air Force Base in South Korea as a Unit Armorer, Supply Specialist, and Budget Analyst.

After serving, Kelli accepted a contract job in the Middle East in Camp Doha, Kuwait. Serving as a financial analyst at the main logistical point and continued in her career back in the states working for both government and private organizations while eventually settling down in Florida to raise her family.

Kelli eventually returned home to New York and settled down in St. James where she was re-married to a childhood friend, Stephen, retired FDNY Fireman.   Kelli works here at Paws of War as the Veteran and Community Outreach Liaison.  She loves serving her veteran and first responder community all while helping animals in need.

In 2020, Kelli and Stephen adopted their adorable Dalmatian puppy Rolly who goes to training at Paws of War to become a service dog for her husband.

Her husband Stephen, and her son Stephen are volunteers at the Nesconset Fire Department. Her step son, also named Stephen just joined the FDNY EMS, she’s surrounded by Stephens! She is so proud of her family and all of their accomplishments.